Photographers answered this eternal question a long time ago by simply voting with the ruble (dollar) – the number won, and it won not by quality at all, but by speed, for the sake of which everything is forgiven for the figure. Yes, the film loses a lot to digital in terms of speed, but in terms of quality it will not lose soon – the dynamic range of the film is still unattainable for a digital camera, even in comparison with full-frame matrices (and losing it is an unaffordable luxury), and detail, in due to the presence in a digital camera of algorithms for interpolating channel data, noise reduction and subsequent clarity enhancement. Do you know that movies are still shot on film? But digital technologies in video appeared much earlier than photography. 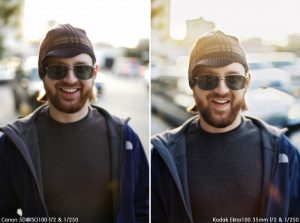 For your information, the film produced so far has not died out yet, because it has gone into the class of enthusiastic photographers and professional photography. The couple of brands that remained on the market (Fujifilm and Ilford are the most famous) survived precisely because of the availability of highly specialized professional-grade films, Kodak is slowly dying.

The second drawback of the film follows from the first – the image initially exists in analog form, and in order to transfer it to a computer (to be printed or published later on the network), it still needs to be digitized. Digitizing a film frame today, by the way, is much easier than before.